I remember the first time I taught the five-paragraph essay. It was in 1979. I was a brand new composition instructor and I had been told what book to use and that I needed to teach this formula. It was strange to me because I had never encountered it in my own education and it had not been part of the “Writing in the Schools” course I had taken. However, I did as the program commanded me to do.

I remember two students from the course. One was a Chinese girl who wrote short gem-like pieces that were more like prose poems than essays. They were unconventionally beautiful. The second was an African-American clarinet player who wrote like he was taking a free-form solo in a jazz tune. He wrote pages and pages in a rapid scrawl on any assignment, but it was pretty much free association without any coherence. On the day that I introduced the five-paragraph essay, some instinct was telling me that the Chinese girl shouldn’t listen. I was right. Her attempts to write this sort of essay were short, formulaic and vacuous. Within a couple of weeks, she disappeared from the course.

The clarinet player came up to me and said, “I think I need six paragraphs.” I said, “Go for it.” His writing became coherent after he had a form to pour it into. He went from being an unintelligible writer to a pretty good one.

So, the first time I taught this format, it hurt one student, helped one student, and left the rest pretty much unchanged. It might have helped some others too, though their writing didn’t change significantly. But the one it helped the most realized right away that he had to modify it to suit his purposes.

Build on What They Know

However, most students have been so thoroughly drilled in producing five-paragraph essays that we can’t simply eliminate this persistent format. After all, it is possible to write a good five-paragraph essay and, of course, no one wants to be told that everything they know about something is wrong. What we have to do is build on what they know, help them write better essays, and help them grow out of the restrictions of the format.

I have been suggesting that the Roman Six-Part Speech is a good alternative to the five-paragraph essay (also see the mini-module, “The Classical Pattern of Persuasion“). I think it is, but for the reasons outlined above, we can’t just perform a switcheroo. Here are three principles that I think will help students write better five-paragraph essays without getting the Romans involved:

If taken seriously, those three directives will go a long way toward producing better essays. 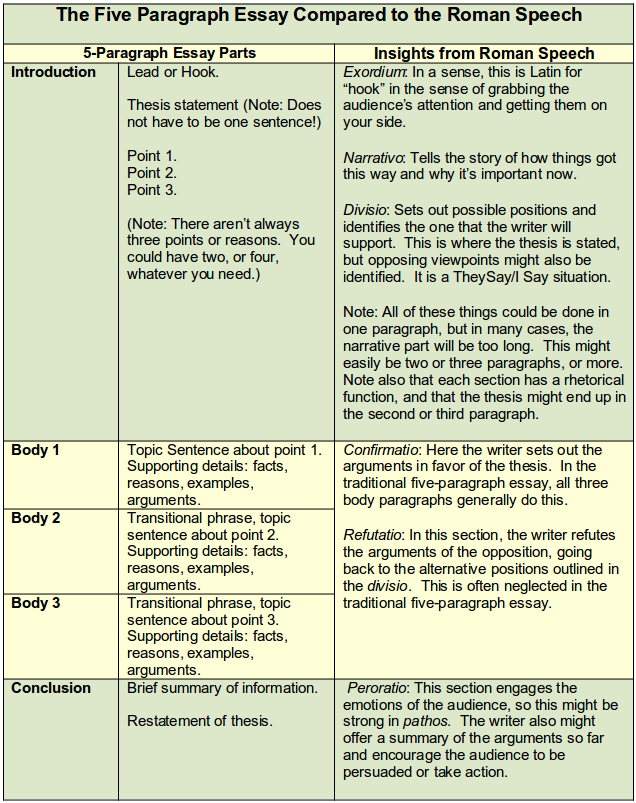 Each section in the Roman pattern has a rhetorical purpose.  These are all purposes and functions that writers of five-paragraph essays should also consider.

I think it is key to move students away from the five-paragraph format step-by-step. The first step might be to include a paragraph of narrative about how the issue developed to the point that we have to do something about it. That is introductory material that might create a need for six paragraphs. Students might think about these questions:

The second step might be to introduce a need to refute counter-arguments. This could take the form of questions such as

Putting more emphasis on these concerns, which are not generally part of the five-paragraph essay format and which are likely to expand the essay into six or more paragraphs for reasons that are pretty clear to the writer, will put students on the path to growing beyond the rigid five-paragraph format without having to abandon what they already know.

5 thoughts on “What about the Five-Paragraph Essay?”