As English teachers, part of our job is to teach students to evaluate sources and arguments, separate fact from opinion, and recognize rhetorical strategies when they are employed to deceive the audience or obscure the truth. What are we to tell our students when fake news and unsupported accusations influence an election? How can we respond to a spokesperson for a president elect who says the following:

“One thing that’s been interesting this entire campaign season to watch is that people that say facts are facts. They’re not really facts,” Trump surrogate Scottie Nell Hughes said on “The Diane Rehm Show” on NPR. “It’s kind of like looking at ratings or looking at a glass of half-full water. Everybody has a way of interpreting them to be the truth or not true. There’s no such thing, unfortunately, anymore as facts.”

This sentiment is not new. Ron Suskind of the New York Times published a now famous quote in an article about the George W. Bush administration:

The aide said that guys like me were “in what we call the reality-based community,” which he defined as people who “believe that solutions emerge from your judicious study of discernible reality.” I nodded and murmured something about enlightenment principles and empiricism. He cut me off. “That’s not the way the world really works anymore,” he continued. “We’re an empire now, and when we act, we create our own reality. And while you’re studying that reality — judiciously, as you will — we’ll act again, creating other new realities, which you can study too, and that’s how things will sort out. We’re history’s actors . . . and you, all of you, will be left to just study what we do.”

The “aide” is believed to be Karl Rove.

Comedian and Late Night host Stephen Colbert coined the term “truthiness” for this phenomenon. A statement has “truthiness” if it feels true because it supports the individual’s worldview. We are all susceptible to this.

In 1984, as O’Brien tortures Winston, he argues that there is no world outside of the human mind, so that the Party can control reality in the same way that he can make Winston see five fingers when there are only four. This is “Believing is seeing” rather than “Seeing is believing,” as we would normally say. Winston’s job in Oceania, before he is arrested, is to rewrite news articles and historical documents to reflect Big Brother’s ever changing positions. Big Brother controls the media, controls history, and controls the mind. This is where “post-truth” leads in Orwell’s fictional world. And in our world, surveillance is deeper and more pervasive than in the novel.

In addition to fake news, much of the discourse of the election was conducted in memes–images combined with short pithy texts to make political points. Memes are inherently unstable and open to various interpretations. For example, say I take an image of Darth Vader and combine it with the text “We hold these Truths . . . .” Those words connect Darth Vader to the Declaration of Independence, which says, “We hold these Truths to be self-evident, that all Men are created equal, that they are endowed by their Creator with certain unalienable Rights, that among these are Life, Liberty, and the Pursuit of Happiness.” Is Lord Vader holding these Truths hostage? Or are the words, and the rest of the text they imply, more powerful than Vader and all he represents? Is the meme a sarcastic assertion of authoritarian power or an argument that these self-evident rights are more powerful than tyranny? Different readers will see different meanings. Yet the meme will circulate, making contradictory arguments wherever it goes.

Similarly, say I combine a picture of Donald Trump with the text, “A Hoax Made in China.” Does that encapsulate Trump’s position on climate change? Or does it imply that Trump is a Manchurian Candidate?

Because memes make up such a big part of internet communication these days, unpacking the arguments and the references in memes is an important skill for students to master. Students can also create memes. One of my graduate students created this meme that updates a phrase from the Declaration of Independence a bit. 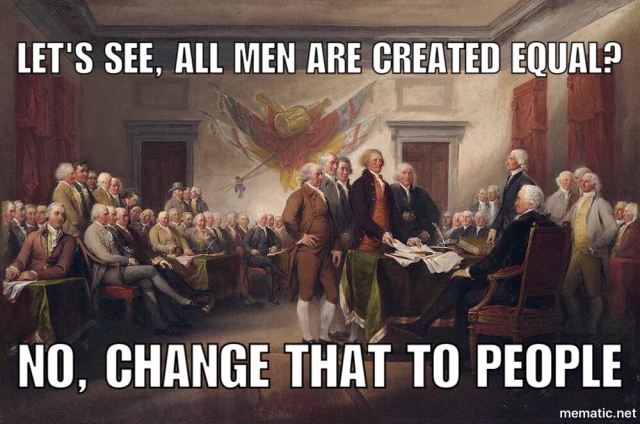 So what do we do? A number of things:

In A Rhetoric of Motives Burke substitutes the word “identification” for the traditional term “persuasion.” He says,

All told, persuasion ranges from the bluntest quest of advantage, as in sales promotion or propaganda, through courtship, social etiquette, education, and the sermon, to a “pure” form that delights in the process of appeal for itself alone, without ulterior purpose. And identification ranges from the politician who, addressing an audience of farmers, says, “I was a farm boy myself,” through the mysteries of social status, to the mystic’s devout identification with the source of all being. (xiv)

Burke writes the book “for tolerance and contemplation” in the aftermath of World War II and the defeat of fascism in Europe and Asia. He defines identification as follows:

A is not identical with his colleague, B. But insofar as their interests are joined, A is identified with B. Or he may identify himself with B even when their interests are not joined, if he assumes that they are, or is persuaded to believe so. (20)

In being identified with B, A is “substantially one” with a person other than himself. Yet at the same time he remains unique, an individual locus of motives. Thus he is both joined and separate, at once a distinct substance and consubstantial with another. (21)

Burke argues that his book “deals with the possibilities of classification in its partisan aspects; it considers the ways in which individuals are at odds with one another, or become identified with groups more or less at odds with one another.” According to Burke, “identification is compensatory to division,” and “the most tragically ironic of all divisions” is war, which Burke calls “a disease of cooperation” because of the many cooperative acts that go into a single act of destruction (22).

For students, this perspective leads to a number of useful questions:

The appeal to pathos is an appeal to the emotions. Fear and hate are powerful emotions that can be used by a speaker to persuade an audience to take actions that they would not take through logic. Compassion is another emotion that can be triggered by an image of a starving baby or a cute puppy. Most students are familiar with this sort of appeal. However, a desire is perhaps an even stronger appeal. We want something–a new car, a new guitar, new shoes, a prestigious award, a high position–because of how it makes us appear to others. We are not really pleasing ourselves, but pleasing the other, or in many cases, as Lacan says “the big Other,” the culture, the society, the media, etc. We act according to the desire of the other.

In my seminar this quarter (fall 2016) we read Changing the Subject in English Class: Discourse and the Constructions of Desire by Marshall W. Alcorn Jr. Alcorn articulates a composition course based on Lacanian psychoanalytic theory. He says, “My central argument is that the rhetoric of discourse is libidinal” (26). He argues that some discourses are libidinal for us, eliciting strong attention and response, while others, perhaps a university math course, are “inert representations that we handle like packages.” Alcorn argues, citing Freud, that we are much more moved by libidinal attachments and by the loss of such attachments than by rational discourse. In fact, to sever such an attachment, we must go through a period of mourning.

What does he mean by “libidinal”? Once I was teaching a piece by the feminist Kate Millet, “Manifesto for a Feminist Revolution,” in which she argued, very logically, that all relations between men and women are political, and that marriage is just another form of prostitution. A male student from Texas came up to me after class and said “My brain can understand her arguments, but my upbringing and my heart say that she is wrong.” This student has concisely articulated the problem. When we argue against family beliefs and the heart, we are going to meet resistance, whether we are mere teachers, Kate Millet, or Hillary Clinton.

An ideal democracy requires that people be able to recognize their own desires and the desires of others. In both cases, desire must circulate freely within and among people. Oppression results whenever desires are cut off from expression and circulation. (66-67)

In the conclusion he argues that

The primary purpose for a composition course, even one that seeks political change, is not simply to teach political truths. Rather than promoting particular political beliefs, we must explore how desire supports beliefs and how the ability to be fully responsive to the ideas and real feelings of others requires slow adjustments in bodily feeling. . . . We do not need to attack the resistance we may find in our students (or ourselves); we need only review those examples that show how characteristic it is for people to dismiss beliefs that challenge their own worldviews. (127-28)

Both identifications and desires are powerful irrational forces that must be taken into account. They cannot be ignored or denied in teaching or in political discourse. No human is above them. I think this explains a lot about what just happened in the election, and what we must do to prepare our students for the world to come.