I first met Jennifer Fletcher when she joined our ERWC Task Force as a high school representative. At the time she was Chair of English at Buena Park High School, but she was working on a Ph.D. at UC Riverside (and raising two kids!). Soon she surprised us by taking an English Education position at CSU Monterey Bay. Jennifer has an amazing resume: high school teaching, chairing a department, scholarship, and publications. She is quite agile in moving from theory to practice. And she lives and breathes ERWC.

So it was no surprise to me when she published this wonderful and timely book, Teaching Arguments: Rhetorical Comprehension, Critique, and Response. 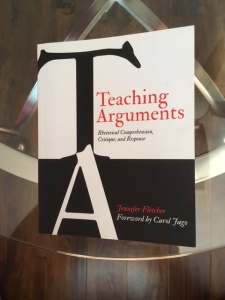 The book synthesizes concepts from classical rhetoric, modern rhetoric, Common Core State Standards, and Jennifer’s teaching experience and wisdom. It manages to be both academic and personal, with practical teaching strategies on every page. As Jennifer herself says in the introduction:

This book is about opening doors to deeper learning for all our students through a rhetorical approach to arguments—an approach based on situational awareness and responsiveness instead of rules and formulas. Throughout the chapters, you’ll find detailed examples of activities, such as the rhetorical précis, descriptive outlining, and the doubting and believing game, that show students how to move beyond a superficial response to texts (xiv).

A bit later she offers a justification for teaching rhetorically:

Rhetoric targets the conventions and processes of high academic literacy, including the sophisticated responsiveness to context that characterizes college and workplace writing. Writing rhetorically means writing with attention to argument, purpose, audience, authority, and style demanded by academic texts (xv).

The first chapter is about “open-minded” inquiry. It begins with activities for closely attending to the features of a text, even a visual text such as a painting. Then Peter Elbow’s “believing game” is introduced (the “doubting game” will appear in the next chapter) along with checklist questions for facilitating the activity. This is demonstrated through a detailed analysis of an op-ed by David Brooks, followed by a section on “Discovering the Question at Issue” which is built around the Ciceronian concept of stasis. Stasis theory is presented with lots of examples and sample questions, making it clear how it might be used with students. Though the theories deployed span centuries, everything is tied together by the focus on the classroom and the students and by the author’s personal experience.

Subsequent chapters discuss critical approaches to text, modern application of the ancient Greek concept of Kairos (timeliness and appropriateness), audience, purpose, and the three appeals–ethos, pathos and logos. The chapter on the appeals is especially useful because it goes deep into each appeal rather than engaging in the checklist sort of approach that many teachers fall into. Every rhetorical concept is described, contextualized, demonstrated, and explained, often with charts, handouts and other activities that can be used directly in class, with more available in the appendix.

The final chapter is called “Aristotle’s Guide to Becoming a ‘Good’ Student,” but it is really Jennifer’s guide. It focuses on habit, identity, confidence, self-perception, performance, insiders versus outsiders, modeling, mentoring, teachable moments, imitation, and flow. Obviously these concepts go far beyond Aristotle. Reading this book is like accompanying the author on a personal intellectual journey through rhetoric and teaching, a journey on which you learn, grow, and pick up handouts that you can use on Monday morning. I recommend it highly.

One thought on “Teaching Arguments: Rhetorical Comprehension, Critique, and Response”