Cite strong and thorough textual evidence to support analysis of what the text says explicitly as well as inferences drawn from the text, including determining where the text leaves matters uncertain.

The following activity asks students to determine whether specific statements about the novel are implied by the text, are true according to the text, are exaggerated, or are false. Then they share their charts with a partner and discuss their choices and their reasons for making them. This activity engages the students on several levels. It is a comprehension check, but most of the answers are debatable in or way or another. It requires students to interpret the text based on evidence and discuss or defend those interpretations with others.

Reading: Annotating and Questioning the Text

Skim the following statements before you read the chapter (the numbers in parentheses refer to pages in the Scribner paperback edition of 2004). After reading, go back and put an X or a check mark in the box that you think best describes the truthfulness of the statement. Use the following criteria:

After filling out the chart, share your answers with a partner. If you don’t agree on every statement, discuss your reasoning and your evidence for your answers.

The first six are done for you to demonstrate how it works. Number 1 is clear. Your answer to number 2 might depend on how you define “friends.” Nick and Tom know each other, but they are not close. They are more like acquaintances. Number 3 is “exaggerated” because although Daisy knows people in Chicago who miss her, it is not the whole city and those people are not “desolate.” Number 4 is clear. Daisy has a daughter, though we do not see her at this point. Number 5 is “exaggerated” because although Jordan may have been lying on the couch for several hours, she probably remembers her life before the couch. Number 6 is a difficult one. Tom has been reading a racist book and he tries to summarize the arguments in it, but doesn’t present much detail. The others don’t seem to value his analysis very much, so “implied” is a good answer. One could argue, however, that Tom is smarter than George Wilson. 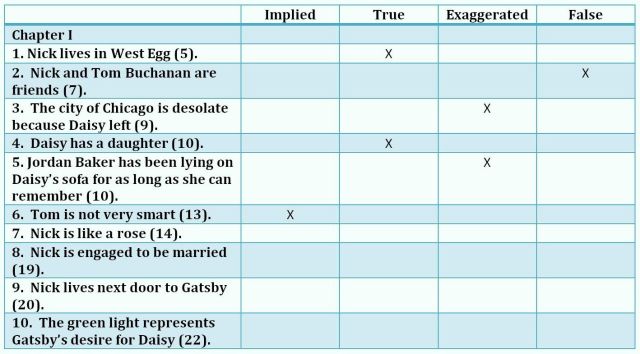 You may find that something that is implied at one point in the novel is confirmed as a fact, or proven false, later in the novel. This is part of the fun of reading a novel.