Do you want to be a writer?  Do you want to get paid?  Is it even possible in an environment of internet publishing that has brought traditional newspapers and magazines to their knees?  You might want to look up Dr. Sarah Mesle, visiting professor in English at UCLA, Senior Humanities Editor of the Los Angeles Review of Books (LARB), and co-editor of avidly.org, who gave an informative talk on publishing in the digital world to students, mostly English majors, at Cal Poly Pomona, last Wednesday, May 14, 2014.

Dr. Mesle said that the purpose of the Los Angeles Review of Books is to “revive and re-invent the book review.” Avidly.org, which she started with Sarah Blackwood, and which exists as a “channel” of LARB, “specializes in short-form critical essays devoted to thinking and feeling about culture.”   Articles on both sites tend to be written in first person and take a subjective gonzo-style approach.  For example, a piece on Avidly called “Silly Theory” by Jordan Alexander Stein describes his friends in grad school learning about theory by making jokes about it (The illustration for the piece is a parody of the the Obama “Yes We Can” poster that says “Yes We Lacan”).  Dr. Mesle’s latest piece on LARB is about the latest episode of Game of Thrones and is called “Ten Things I Hate about My Favorite Show.”

I am jumping ahead in the presentation, but Dr. Mesle discussed the importance of developing a voice, a persona, perhaps, though she did not use the word, a “brand.”  However, Dr. Mesle noted that she presents herself differently in different contexts. 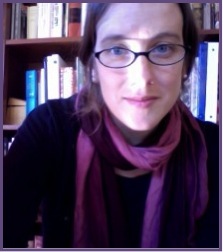 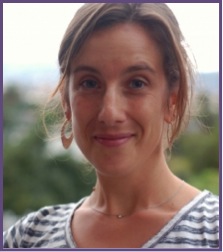 Dr. Mesle had lots of solid advice for students aiming at publishing careers on the Internet.  She said

The first two points are basic rhetorical concepts of audience and purpose.  It is true, but not obvious, that whether you are writing a sermon in the high style or assembly instructions in the low style, or conversation in a dialect, rhetoric applies.  The latter three points are good advice for those who are intimidated by writing itself and by the blank screen.  You don’t have to be a genius.

The next set of points were about a particular stance toward the world and toward text.  She says

One could dispute the assertion about college, but the rest is hard to question.  To write, you must be interested in ideas, people, and things.  Knowledge brings interest, interest leads to more knowledge.  Language is the medium of learning, and of expression.  And without doubt, the world is made of stories.

The last point she added to this set was “Grammar matters.”  Don’t submit material or post it to your own sites with obvious, or even not so obvious, grammatical mistakes.  That doesn’t mean you can’t play with language, use dialect, or break so-called rules.  Just make sure you know what you are doing and understand the effect on the reader.

Dr. Mesle advised students to read the Internet and read their own reading.  In other words, pay attention to how what you read affects you.  What makes you excited? What makes you bored? What do you learn from that?

She also said that she wishes now she had taken a design course and a programming course.  Writers who publish on the Internet are probably going to be involved in visual design as well, and maybe even coding.  At any rate, those who know these things will be more marketable.

Dr. Mesle closed with some ideas about getting published.  These were

She noted that posting to Twitter is good practice because it forces you to be concise.  It is hard to be funny in 140 characters. She also recommended writing captions for the New Yorker cartoon contest for the same reason.

Finally, she had some suggestions for pitching a piece to a website:

At the end we had some discussion about what she means by “effect” here.  Is this the purpose?  Is this what Aristotle calls “pathos,” the effect on the audience?  Is it the effect of the persona of the writer has on the audience, an effect of ethos, or a kind of schtick? I think it is a bit of all of these.

It was an interesting and useful talk that left the students in attendance with much to think about.

One thought on “Where Does Writing Go?”